A HALF-BAKED
ROYAL COMMISSION OF INQUIRY 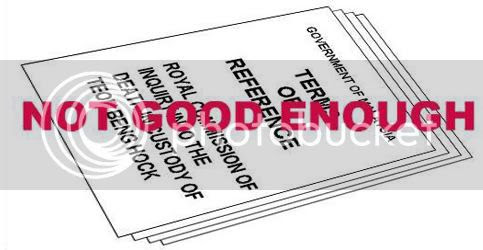 The government has agreed to form a royal commission of inquiry (RCI) to look into the investigative method used by the MACC.

The RCI's scope of work will NOT cover the sudden death of Teoh Beng Hock.

Prime Minister Najib announced yesterday that the CAUSE of the death of Teoh Beng Hock will be determined by an INQUEST, and NOT by the Royal Commission.Read here for more in "Straight Talk" Blog

The Royal Commission is ONLY going to look at the interrogation methods of the MACC.

You don’t need a Royal Commission for that.

If you want to know, just ask people who have been grilled by the MACC. They can tell you what it’s like.

Royal Commission for what?

The last two we had achieved little in the way of making things better and punishing the guilty.

And an inquest for what?

We all know what the cause of death was. An autopsy by doctors from Tengku Ampuan Rahimah Hospital and University Malaya Medical Centre showed that Teoh died from the impact of falling from a great height. It also showed he did not have any injuries before the fall.

How he got there is another matter.

If after completing investigations, the police cannot, do not, or will not reveal who or what caused Teoh to fall, what makes you think an inquest will have a more revelatory effect? Read here for more in "The Aisehman Blog"

Opposition leader Anwar Ibrahim, has asked that the terms of reference of the royal commission should also cover the CAUSE of Teoh Beng Hock's death.

"Looking at the terms of reference of the royal commission as outlined by the Cabinet, it is to only study the interrogation tactics employed by the Malaysian Anti Corruption Commission (MACC), and not Teoh's cause of death.

The formation of the royal commission (as that proposed by the Cabinet) would not stop the erosion of public confidence in various enforcement and justice institutions or answer the riddles surrounding Teoh's death.

I am of the view that the commission should focus on the CAUSE of Teoh's death.

It is not proper for the cause of death to be determined through an inquest by appointing a magistrate while the investigations are being conducted by the Home Ministry and the police.

The government should realise that the public want a Royal Commission was because they no longer believe in the integrity and the independence of the police and the Home Ministry.

I am certain the public do not want to see this royal commission to end like the VK Lingam saga or the former IGP's attack on me where no proper follow-up action was been taken."

If the recommendations were ignored, like the RCI of Police Force, we will still go back to a square box.

If this RCI is going to end up with the other two, then expect no justice to be served on the family, friends and loved ones of Teoh. Read here for more

The Pakatan Rakyat leadership issued a statement saying the government was wrong in limiting the terms of reference of the royal commission of inquiry to look only into the MACC's investigative procedures.

Pakatan Rakyat believed that the royal commission MUST also look into the CAUSE of Teoh's death.

The joint statement by the Pakatan Rakyat leadership said:

"This makes a mockery of the public outcry for justice, truth and accountability,

Whilst it is appropriate that the royal commission investigate the procedures of investigation of the MACC, the key question of how Teoh died must also be investigated and answered by them.

That question cannot be separated from the more general issue of how the MACC conducts investigations,

In an inquest, police will give the evidence that it has gathered and the DPP assisting the coroner in the inquest would direct questions. There are limited roles played by other parties and this results in numerous inquests ending up without determining the cause of death" .

Furthermore, the public has questioned the integrity of the police, judiciary and the prosecution in the past. Hence, we strongly feel that an INQUEST IS INSUFFICIENT.

Expanding the Terms of Reference of the Royal Commission to determine the cause of death of Teoh Boon Hock would be seen to be independent."

The Pakatan Rakyat said there were many questions that needed urgent answers to the circumstances leading to the death of political aide Teoh Beng Hock while being questioned by the Malaysia Anti-Corruption Commission last week.

They said that some of the questions that needed to be answered were:
Read here for more

Teoh death: No to inquest, yes to royal commission

A Royal Commission of Inquiry, and not an inquest, should look into the death of Teoh Beng Hock.

This was the consensus of the legal fraternity and the Human Rights Commission of Malaysia (Suhakam) in response to a statement by Federal CID director Datuk Seri Mohd Bakri Zinin that Teoh's case could end up in a coroner's court as an inquest would usually be conducted by the court for cases of "sudden death".

Teoh's case has been classified as such, and this is normally investigated by an inquest, which is essentially judicial investigations carried out by magistrates upon the request of the public prosecutor.

Bar Council president Ragunath Kesavan said an inquest would not be able to answer all the questions raised in the last one week on Teoh's death.

"In this case, there are more answers needed than just the cause of his death. An inquest would be insufficient to address these questions."

Ragunath said in contrast to the limitations of an inquest, a Royal Commission would cover a wider scope, including finding out the circumstances surrounding his death, regulations, protocols and standard operating procedures of the MACC.

"MACC is a very important public institution and there is a negative impact on the commission if they are unable to answer, for example, why he was not accompanied by a lawyer, and the need to question him for a long time when he was a witness assisting in the MACC's investigations," he said.

Ragunath said it was pertinent that the a Royal Commission of Inquiry presides over the matter as it was also in the position to clear the MACC's name.

Criminal lawyer Datuk Baljit Singh Sidhu also supported the call for a royal commission to oversee the inquiry. "This is a situation where the MACC, given tremendous powers to run investigations to the extent that they can't be sued in a civil court, also carries the responsibility of a highly-accountable body. If its officers had not acted in a wrongful manner, then it is only right that a royal commission presides over investigations. It is hugely important that the public does not lose faith in the MACC.

"A royal commission is more open and transparent as it is not rigidly governed by the rules of the criminal procedures. In an inquest, the coroner who makes the decision is normally a magistrate but in a royal commission, senior members with expertise covering every aspect of the case would be able to conduct a more comprehensive inquiry."

Suhakam commissioner Datuk N. Siva Subramaniam said a Royal Commission of Inquiry would, among others, be able to dwell into matters like competency and manuals used by MACC officers to question their witnesses.

"The MACC has no choice but to clear its image and there is no better way than this. The royal commission panel will have to get the consent of the Yang Di-Pertuan Agong and therefore it will investigate the matter as an independent party."

Najis is behind the death of teoh, maybe, so he want to cover up.