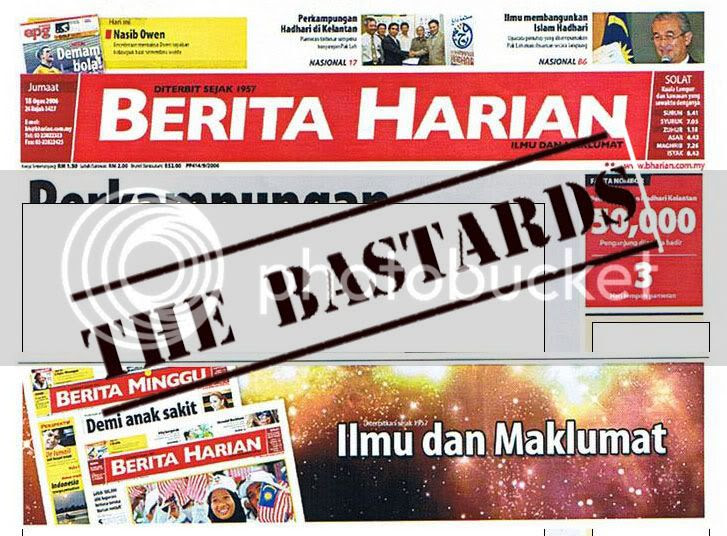 I read with disbelief - and not to mention, a certain degree of disgust - your article titled "Kematian Teoh timbulkan pelbagai spekulasi politik" appearing in your newspaper yesterday.

It is a measure of the depth of the racialist pit in which you are and the extent of your warped mind that such article was published by you, a newspaper which, in your own words, "is able to stimulate the minds in pursuing information where information is the primary source of economical success" (my lose translation of "akhbar yang dapat merangsang minda dalam mengejar arus maklumat yang mana pengetahuan adalah sumber utama untuk kemakmuran ekonomi" as stated on your web site).

But then again, coming from you, whose sister paper is the NST (New Straits Times), I suppose, is not surprising. In fact, it should have been expected. First of all, thank you for telling us that it was an "accident".

I thank you because earlier, we were all made to believe that it was a possible suicide.

It seems that you know something which we, the stupid and gullible people of Malaysia, don't seem to know.

As you have quite clearly and categorically labeled the incident as an accident, I would be grateful to death (pardon the pun) if you could fill me up as to how the accident happened; who were involved and why it happened. Did the deceased sleep walk while he was sleeping on the settee at 6.30am?

You seemed to take objection that this incident has been politicised. You also deemed it totally improper for some people to use the incident to gain political mileage.

I am surprised at how shallow your journalistic power of observation is.

Allow me to tell you this. And I am going to use bold letters, just in case you miss the point. THIS IS A POLITICAL MATTER.

The deceased was the political secretary of a DAP representative.

So, in the first place, it was, and still is, and will be a political matter.

You cannot run from that fact.

You spoke as if no other party has politicised matters which have got nothing to do with politics in the past.

Your political master has even gone to town using the Royal House as a political gimmick in Bukit Gantang.

And how about Anwar Ibrahim's private life? Since when has a man's behaviour in bed or on a certain mattress, become a political capital? How about the act of buying cows for sacrifice on Hari Raya Aidil 'Adha, for the obvious benefit of the poor and impoverished?

Is that political? And what about the call for the ISA to be abolished? Some people even said that ISA was a "Malay right"!

So please, spare us this seeming and sudden journalistic naivete. Spare us this whole stupidity. We are not stupid.

The next thing that I wish to say is this. Why are you bemoaning the fact that this "accident" has been politicised and used to gain political ground when it is obvious that such political maneuvering and posturing would not have happened if such "accident" had not taken place at all?

It is regrettable that in this day and age that our state agency could still treat citizens like some worthless piece of flesh and bones. It is like the state is a gangland, ruled and managed by fear, where dungeons and hooded men abound, ready to interrogate in the darkness of nights.

Why have you not asked why such "accident" ( I just love that word) had to happen in 2009 in our country?

Why have you not championed the rights of the people, since you proudly proclaim that you are a newspaper which is able to stimulate the minds. Whose minds are you talking about? Your own minds?

Are you stimulating the minds or the emotions? Or do you actually know the difference?

What I find most objectionable is your attempt at turning the issue into an anti-Malay leadership issue.

While you bemoan the fact that this sad "accident" has turned into a political issue, it does not behoove you to shout and scream that the very same issue is a racial one. Two wrongs do not make one right.

Yes, the deceased is a Chinese man. But most and foremost is the fact that HE IS A MALAYSIAN.

Every death in custody, regardless of race, creed and breed, will be a tragedy and will be treated as tragic by we, Malaysians.

When Nurin Jazlin Jazimin and Sharlinie Mohd Nashar were kidnapped, the WHOLE Malaysia was outraged.The whole Malaysia is outraged not because the victims are Indians, Chinese or Malays.

Or are you too blinkered to know that?

The outrage stems from the fact that the victims were seemingly treated in an inhuman manner, in a manner which is almost animalistic in nature. The whole Malaysia is grieving. Do you think only African American grieve the death of Michael Jackson? Or are you too busy with your racial study to notice?

And what is this about the non-Malays challenging the Malay leadership?

In your own stupendous journalistic inquiry, YOU asked:

Huh? My teenage daughter would ask, "wassup with you dude?" Or "can I have some of that thang (sic) which you are obviously smoking?"

First of all, all of us, and that includes those politicians whom you are accusing of politicising the "accident", do not have a clue on who the officers in charge were. Nobody knows their identity, let alone their races.

Good God! What are you trying to do?Turn this into a Malay against the world issue? Quite obviously, no?

The truth of it all is this. If you still have no clue, let me tell you. IT DOES NOT MATTER WHAT RACE THE GUILTY PARTY IS (if anybody is guilty at all). The People will still feel outraged even if the party involved is a Ghanaian who works for MACC! Get that?

It is a shame.

I was pleased to note on Sunday that the PM has taken the trouble to express his regret that someone has died, that a life has been lost. He even conveyed his condolences. He even sent his political secretary to visit the family.

The DPM has now not discounted the establishment of a Royal Commission. Hishamuddin Hussein has undertaken to supervise the investigation personally.

SUHAKAM has said it will commence an investigation. Whatever may be the result and effects of all these promises is unknown.

But I would take them all on face value. I feel pleased with the humane approach. It just shows that at least, the PM, DPM and the Home Minister actually saw a tragedy above politics.

And it is a crying shame that you, Berita Harian, have to overshadow the fresh air of humanity emanating from our leaders by the publication of that article of yours. 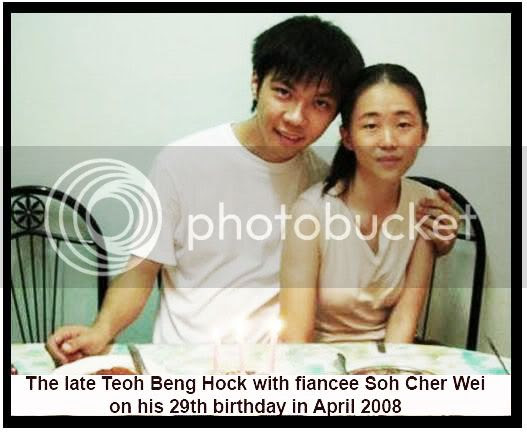 This is pure gutter journalism at it's ugliest worst. Trying to fan May 13 all over again and put the blame DAP and the non-Malay Malaysians in another repeat of this Nation's history? I am surprised how desperate these extremists could be. Yes, retain the ISA for this bunch of idiots who fanned racial sentiments at this sensitive time.
malsia1206