Deputy IGP Tan Sri Ismail Omar, Stay Out of the Partisan Politics of the Country. 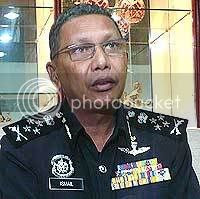 Deputy police chief Ismail Omar today issued a stern warning against those speculating and spreading rumours of a government takeover.

He said that these speculations were causing instability in the country.

He told this to reporters at a special press conference at the federal police headquarters in Bukti Aman this afternoon.

In recent days there has been much talk of an impending takeover of the government by Anwar Ibrahim-led Pakatan Rakyat.

The Malaysian Police Force should get its nose out of the partisan politics of this country.

The present leadership of the Police Force is already causing irreversible damage to the confidence of the citizens as an institution to which they can look up to for their safety and security.

Recent actions by the Malaysian Police Force have put a huge question mark on its neutrality and where its accountability lies while the political stakes are being played out by the elected politicians in the public arena.

While outright racists such as Datuk Ahmad Ismail getting away for causing racial discontent and Datuk Seri Khir Toyo getting away with false allegations against a Member of Parliament and a Senior Exco Member of the Selangor Government, we find our Police Force spending public-funded limited resources and time to nab, at times in the middle of the night, innocent citizens such as Raja Petra, Syed Azidi Syed Aziz(Shieh-Kickdefella), MP Teresa Kok, journalist Tan Hoon Cheng and the lawyers of the Hindraf movement under the draconian Internal Security Act.

When prominent bloggers, journalists and opposition politicians are targeted for arrest under the ISA for the flimsiest (and even for false) reasons, one cannot help but feel that under the present leadership of the Police Force, the interests of the nation are SECOND to that of the ruling political parties in power .

Deputy IGP Tan Sri Ismail Omar should ask himself why is that our police force is seen by majority of Malaysian citizens as more interested in protecting the interests of ruling party politicians instead of that of innocent citizens?

And yet, meanwhile criminals and murderers of victims eg little Nurin, are yet to be captured after more than a year.

What has the Deputy IGP Tan Sri Ismail Omar got to say about what's being done to date to capture the murderer(s) of little Nurin?

The fact of the matter is that the streets of Kuala Lumpur and the suburban areas surrounding Klang Valley and major towns have never been safe from criminal gangs operating nonchalantly even during the day time.

We must remind the Deputy IGP Tan Sri Ismail Omar that the Police Force is constituted under the Federal Constitution to protect the citizens of Malaysia. It cannot usurp the power it is being granted under the Federal Constitution to be a power unto itself, nor to treat Malaysia as a Police State, nor should it be made a subservient tool to fulfill the whims and fancies of ruling political parties running this country.

We question the motive of the Deputy IGP to come out to warn citizens for discussing or speculating about government take-over.

Such public discourse by citizens on the politics of the nation is within the domain of responsible free speech and is part of the democratic process sanctified in the Federal Constitution.

Malaysians after 51 years of independence to not only know how to vote , but are matured enough to know how to have a conversation on the politics of this country without having the Deputy IGP, a mere public servant, issuing warnings.

Thus, this press statement by the Deputy IGP is un-called for and certainly unwarranted . It further erodes the little trust that the rakyat has for the Malaysian Police Force.

If the Deputy IGP cannot do his job that calls for neutrality of a public servant with regard to the politics of this country, we say politely he should quit his job and take a pension, with the compliments of the rakyat. Others might say, Go take a hike !
-Malaysian Unplug