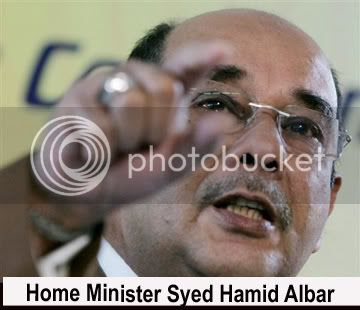 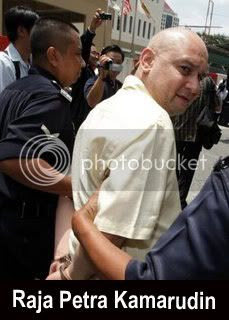 According to her, Raja Petra was arrested when 10 police personnel who arrived at his home in Sungai Buloh at 1.10pm.today

When Malaysiakini contacted her at 1.25pm, the police personnel were still there.
Marina's received a 'notis penangkapan' of Raja Petra from Chief Inspector Azrin Abu Bakar. The stated reason of detention of Raja Petra was

Read here for more in Malaysiakini and here

Umno supreme council member and Foreign Minister Datuk Seri Dr Rais Yatim said RACIST Datuk Ahmad Ismail, who had deliberately set out to incite racial hatred by Malays on the Chinese in public and had allowed his supporters to tear down the photo of a Chinese political leader, should NOT be locked up under the Internal Security Act.

Rai Yatim said "It will just have a huge effect on Umno and the rule of law if THAT happens." Read here for more
AND...

".....NO action has been taken against Umno newspaper Utusan Malaysia for its shrill reporting tone and an item in Utusan Malaysia that a Pakatan Rakyat executive councillor in Selangor was behind attempts to stop the azan prayer call in mosques ostensibly
because its noisy..." Read here for more

I condemn the arrest of social activist and blogger Raja Petra Kamaruddin under the draconian and infamous ISA. By sanctioning the use of the ISA to avert the process of transformational change in Malaysia, the UMNO-led BN government is confirming that it has lost touch with the will of the people and is no longer capable of leading within the framework of a just and democratic society.

Raja Petra should be released immediately and any allegations leveled against him by the Ministry of Home Affairs must be resolved swiftly by the due process of the law. Raja Petra should be given access to proper legal counsel, and his wife and children should not be denied an opportunity to visit him while he is held captive under this illegal detention.

Raja Petra’s detention and the show cause letters issued today to Sin Chew Daily, The Sun and Suara Keadilan, and its earlier banning of prominent political websites, demonstrate clearly the government’s willingness to subvert the freedom of speech at a time when expression of dissatisfaction with the government’s policies is at an all time high.

In the aftermath of the March 8th elections and the Permatang Pauh by-election the Malaysian people have demonstrated their courage and commitment to building a mature democratic society. The dastardly act of detention without trial will do nothing to abate the current government’s declining credibility, and in fact will likely hasten its eventual collapse.

KeADILan reiterates its vehement opposition to the practice of arbitrary detention without trial. We have consistently called for the immediate release of all ISA detainees, as such practices have no place in a democratic society. The ISA is used to quash dissent and smother those who in exercising their right to free speech voice opinions contrary to the preferred views of the ruling clique.

Invoking the ISA just days before September 16th is clearly an attempt to engineer an atmosphere of fear and instability that would justify the government’s heavy-handed tactics against those aligned with the political opposition.

Raja Petra Says His Freedom Depends on Anwar and September 16

".... Today, I received many phone calls from concerned friends who told me that the government is considering detaining me under the Internal Security Act ‘very soon’.

If that does happen, then this could probably be the last article I write, at least until 16 September 2008. So I too need Anwar to succeed. If not I will be in Kamunting for quite some time to come and you will not hear from me over the next couple of years.

Yes, I too have placed, not only my money, but also my freedom on Anwar. And if Anwar fails to deliver his promise on 16 September 2008, not only he but I as well am headed for a fall. But I have confidence he will do it. And I have confidence that my stay in Kamunting will not be for two years but for a mere two weeks.

There is still a long fight ahead of us in bringing reforms to this beloved country of ours.
- Raja Petra Kamarudin

This is a Government that Does NOT give a damn and two Hoots about what the Rakyat, Civil Society and much less Bloggers think or say, (and that include those highly prized bloggers who were made guests of RTM, its media propaganda machine)

SORRY, Mr. Ahirudin Attan, Interim President, National Alliance of Bloggers (AllBlogs) and Dr Lim Teck Ghee, Director, Centre for Policy Initiatives, BOTH of YOU are dead WRONG about convincing this UMNO-led Government to change it's attitude towards the rakyat.

As both of you will know by now, this Government has called in the Police to arrest Raja Petra under ISA. ( Try and contrast this action with the Government's response to racist Ahmad Ismail's blatant racial incitement)
- Malaysian Unplug

The following is an media statement/appeal made by Ahirudin Attan and Lim Teck Ghee that fell on deaf ears:

During the last few days there has been an ominous and increasing crescendo of messages – written and verbal – indicating the imminent arrest and detention of fellow blogger Raja Petra Kamarudin under the Internal Security Act (ISA).

We hope that the Government is not contemplating this action. To alleviate the widespread public uproar and concern – national and international – that this shortsighted action will precipitate, we call on the authorities that may be planning this action to take heed of this SOS; to immediately cease all targeting of Raja Petra through the ISA or any other repressive measure; and to come out instead with an assurance that:

1. No such ISA order is being envisaged to be served on Raja Petra

2. Raja Petra is free to continue his writings on the vital matters affecting the country

3. The draconian legislation of the ISA will NOT be used on Raja Petra or any other Malaysian blogger to punish them for their dissenting views and opinions.

In our view - and if the Government should care to undertake an independent survey, in the view of the great majority of Malaysians and non-Malaysians - Raja Petra in no way poses a threat to the country’s peace and security. Rather, he poses a threat to those individuals and organizations that he perceives as engaging in unconscionable and dastardly acts and activities that are bringing ruin to the nation. Many Malaysians too are of the opinion that his website contains some of the most incisive analysis on the ills that beset our nation. Further attempts to take down his website or to shackle his freedom of expression is not only an attack on a fearless, principled and ethical patriot but they will also be construed as an attempt to restrict our freedom of information and expression, a move that will take the country further down the road of authoritarianism.

While we respect the right to freedom of speech and information, we also advise all Bloggers and other online writers to exercise the same high ethical standards expected of journalists in the traditional media. We do not condone lies and malice in the Internet and should not only stand by what we write - we must be able to defend the truth of what we write.

We emphasize that in our view the current laws pertaining to Sedition and Defamation apply equally to print and online media and should be deterrent enough to check “irresponsible” writings. Hence we urge that there be no resort to a draconian law such as the Internal Security Act to hold peace-loving Malaysian writers to “ransom.”

A democratic government should not for one moment entertain - let alone pursue - the charges that have been leveled against Raja Petra. To isolate those forces in the system that are bent on using the repressive instruments of the state against various opponents for their own benefit, we call on:

1. All fair-minded and honest leaders from the Barisan Nasional and Pakatan Rakyat parties to speak out - privately and publicly - against any attempt to use the ISA against Raja Petra;

2. Component parties of the Barisan Nasional and Pakatan Rakyat to publicly oppose any intended incarceration of Raja Petra under the ISA;

3. Civil society, professional and other organizations and private individuals to demand that the Government guarantees Raja Petra’s freedom of expression and undertakes not to use the ISA against him now or in the future.

We hope that good sense will prevail in our country’s leadership. Any act of repression against Raja Petra especially at this particular time will not go unquestioned or unanswered.

We are confident that hundreds of thousands - if not millions of Malaysians – will stand FIRMLY to make their dissenting views known should the Government choose to silence Raja Petra through the use of the ISA.

Email ThisBlogThis!Share to TwitterShare to FacebookShare to Pinterest
Labels: f