What a Dim-Wit
Federal Minister from Sabah 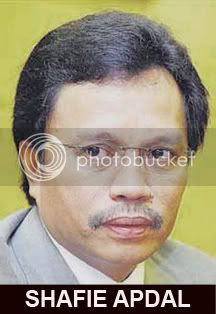 Mohd Shafie Apdal
Unity, Culture, Arts and Heritage Minister
Mohd Shafie Apdal was born in Semporna, Sabah in October 20, 1957. He is married to Datin Seri Shuryani binti Shuaib and has 6 children.He is a member of UMNO and the Member of Parliament for Semporna, Sabah. Semporna is located in Tawau Division, in the east coast of Sabah with a mainly BAJAU-speaking population of about 135,000.
We Say,

This UMNO Minister from Sabah responsible for UNITY and CULTURE believes that the draconian "arrest and detain-first,investigate-later" Internal Security Act should be used to maintain racial and religious harmony among Malaysians.

This is what he said, "We should appreciate its (ISA) MERITS in SOLVING sensitive issues affecting various races and religions in the country."

That is HOW an UMNO-Minister (from Sabah) responsible for a Ministry to maintain UNITY and CULTURE, goes about to solve UNITY problems between races and religions: Bring down the ISA hard on ordinary Malaysians !

Mohd Shafie Apdal is introducing another controversial RACE RELATIONS ACT (another smaller version of ISA?) which was approved by the UMNO-led BN Cabinet.

Mohd Shafie Apdal said that if Malaysia has no Race Relations Act , it is akin to Malaysia WITHOUT a Federal Constitution to uphold Islam as an official religion.

In other words, according to Mohd Shafie Apdal, Islam needs to be protected with the dreadful un-Islamic ISA and the Race Relations Act!

Mohd Shafie Apdal, we would like to think, is a religious person as that other self-professed deeply devout Muslim, PKR MP Zulkifli Noordin from Kulim-Bandar Baharu, who had a very weird view that as Member of Parliament, Islam comes FIRST, while REPRESENTING the interest of multi-racial and multi-religious electorate comes SECOND, and that became the reason why he behaved like a thug in the company of other UMNO thugs at the Bar Council Forum protest.

Likewise we say, Malaysian voters DON'T need an MP and a Federal Minister with a moral outlook and the dim-wit intelligence of the like of Mohd Shafie Apdal.

Mohd Shafie Apdal is unsuited to represent the interests of multi-racial and multi-religious people of Sabah and much less as a Cabinet Minister in the Federal Government.

As a Muslim, his views on the ISA is against all the moral teachings of Islam (read here the views of Mufti of Perlis)and shows that he does NOT believe in the Rule of Law as a means to hold a multi-racial and multi-religious country together. Mohd Shafie Apdal's justification for having ISA and the Race Relations Act is a clear indication he is unqualified to be a Minister responsible for "Unity and Culture" at a time when race and religion are dividing the nation.

We appeal to Sabahan voters with this message: Mohd Shafie Apdal is an example of a BAD representative for multi-racial and multi-religious Sabahans.

We ask Sabahans to ensure that politicians like Mohd Shafie Apdal are prevented from being ever elected again in the next General Election or by-election.
-Malaysian Unplug

Read here and here as reported by Bernama

"There is no need to review the act. We should appreciate its merits in solving sensitive issues affecting various races and religions in the country," he told reporters after witnessing the handing over of aid for the poor by Media Prima in the TV3's "Bersamamu" programme at the Inabah Kamal Mosque here Sunday.

The proposed Race Relations Act had been approved by the cabinet to to deal with matters affecting the sensitivity of each race and religion."

Shafie likened the statements as suggesting that the country did not need a constitution to uphold Islam as the official religion, the position of the rulers and the Malay rights. "Without the constitution, what will be the platform of our actions?" he asked. Read here for more

This sounds like a good idea; but after 51 years of independence?

We should have had this act to prevent the emergence of race-based parties and to ensure that all citizens be given equal opportunity and the rights and privileges accorded to them as a result of surrendering their natural rights to the state.

After 51 years of the institutionalisation of ethnocentrism and many times outright racism in terms of allocation of resources, open-secret indoctrinations, and the exploitation of racial and religious issues for political gain, we are now proposing an act to improve race-relations?

I am now puzzled – by the inherent contradictions we are confronting and will continue to confront vis-à-vis this proposed act.

Since the government had asked citizens like me to make suggestions and seek clarification concerning this proposed act, I have the following questions:

We are proposing this act at a time when we arrest our citizens for no good reason and no trial, using the instrument of oppression no longer suitable for an ultra and hyper-modern society such as ours.

We are proposing this out of desperation and out of sync with the mass sentiment of the day; at a time when the Berlin Wall of our Balkanized race relations is crumbling by the day, each brick in the wall ripped off by the power of the digital tsunami.

We are hearing this proposal coming from a race-based coalition government that wants to ensure that the divide and conquer and sub-divide and sub-conquer policies of British colonialism prevail in the filter-funneled minds of our little brown brothers and sisters.

Perhaps what we need is NOT another act to add to the ambivalence of acts such as The University and University Colleges and the Internal Security Acts but to go deeper into our public institutions and ask why we have not progressed much in race relations after all these decades.

We should investigate further how the New Economic Policy itself as a grand Stalinist-inspired programme of national development has contributed not only to the deterioration of race relations but has cemented racism in newer forms – both subtle and open.

We should investigate how the topic race relations has been taught in our community centers, schools, universities, and other public institutions to see what goes into the mind of our citizens by way of schooling, indoctrination, training, and education – to see what went wrong and what is still not right.

We should examine governmental policies and see if we indeed uncover practices that promote equality, equal opportunity, and empathy in place; policies that ought to have improved race relations, inclusionary, and integrate rather than disintegrate the different races.

This will be a mind-boggling noble proposal for us to contribute ideas. Do we need a new act? Or will a new government with a brand new ideology suffice?

But as peace and justice-loving Malaysians, let us offer constructive ideas to this proposed act.

Let us propose that ONLY a truly multiracial party that has the will, motivation, intelligence and the set of acquired skills should be given the mandate to implement a Race Relations Act.

Any communal-based party is too much a contradiction to put their act together on this one.

A Race Relation Act- for what? Can it bring the races close? Can it make one race understand the other? Can it pacify the thousands of high-achievers who are deprived of scholarship/places in Universities of choice? Can it ensure a good representation of the various races that make up Malaysia in jobs and positions of authority in the government sector? Can it ensure that purchasers of houses pay the same amount? Can it ensure distribution of licenses fairly to those eligible? Can it ensure a fair distribution of government contracts? And can it? can it??????? The list can go on. How will this Act solve all these questions? SOLVE AT LEAST SOME OF THESE - AND WE WILL NOT NEED THIS ACT!

One wonders how Mohd Shafie Apdal can be selected as a federal minister.