Tun Dr. Mahathir, You Could've Been a Respectable Elder Statesman, But You CHOSE to be a Pathetic, Divisive and Whinging Old Man 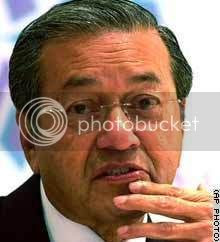 Our former prime minister (Tun Dr. Mahathir) could have wisely taken the route of a retired elderly.

But he is fast losing the wisdom that could have been the hallmark of any senior statesman.

Since his retirement from politics after having held the helm for over two decades, Dr Mahathir has only ADDED to the sordid confusion and dereliction of Malaysian politics.

First, he attacks and disowns the very man he appointed to succeed him. Then he rebounds with wanting to see Deputy Prime Minister Najib Razak take on the leadership of the nation only to soon change his mind again.

Then he walks out of Umno, the very party that he claimed to have fought tooth and nail to protect and nourish for over two decades.

And most recently, he wowed that he would abandon the very nation that gave him a rare opportunity of trust to lead for over two decades. He announced unashamedly that he would migrate if his former nemesis rises to lead the nation. How unpatriotic.

And now, in the midst of the Umno party war, he wants to come back.

All your actions and words are not going down well for the nation. It also earns us sheer embarrassment in the global arena. And locally, it fuels much confusion, disharmony and strife.

You are not in any way helping the nation to forge ahead.

Instead, YOU are pitting man against man and race against race.

As a retired leader, you could have held your self esteem high and continued to be a watershed in the nation's political trials and tribulations leading to maturity and forward movement.

You COULD HAVE BEEN respected SENIOR LEADER who would be the BEST person to provide wisdom that is certainly much needed in these troubling times.

You could have gone on to be the beacon for much of the developing world given the principles you claimed to have championed in the past.
But unfortunately, today we witness the antics of a man to the contrary.

Indeed you have ADDED an embarrassing and painful chapter to the troubled history of Malaysia. And that is most aching to the hearts of the rakyat.

It is therefore best for you, the rakyat, the party, and nation that YOU maintain SIGNIFICANT SILENCE.
- JD Lovrenciear

Dr M Should Speak for Himself

Dr M's recent statement about the Chinese Malaysians being more interested in business and would readily accept race based politics shows how outdated he is as a politician. At the same time he highlighted the some possible actions which could be taken against the Chinese community should they voice out their dissatisfaction against the government.

Yes, Dr M has proven to us that he is a bygone, a relic of his generation.

I reckon many of his generation are more progressive than the ex-premier to suggest that Chinese Malaysians do not mind race-based politics. Stupid!
Posted by Malaysian Unplug at 16:04:00