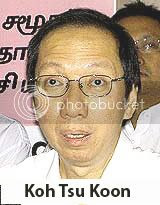 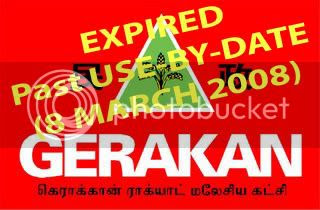 The party is now reviewing its role in Barisan, he said, just a day after he had declared Gerakan had no intention of quitting the coalition.

UMNO Division Chief for Bukit Bendera, Ahmad Ismail, said that he was sure MCA would garner unanimous support from the Chinese if Gerakan broke away from Barisan. Read here for more
UPDATE: From Malaysiakini:(read here for more):

Tan said the political tsunami of March 8 has opened his eyes. He said he has lost faith in the BN government.

“I believe that race-based parties in BN like MIC, MCA and Umno are NO longer relevant.

There are people who join BN and try to make a change.

I can also say that I tried to make changes from WITHIN but I reached a point where it was almost IMPOSSIBLE to do so.

We are just there to rubber stamp whatever they (UMNO) want to do.

Enough is enough. Their corruption and mismanagement - the country is going to be broke if they are NOT stopped. ”

Tan is the third senior Gerakan leader to quit the party.

Over the last 15 years, UMNO had ruthlessly marginalised GERAKAN so completely that as a Component Party of the ruling Barisan Nasional, it has become nothing more than a spineless, toothless and gutless political entity, irrelevant to its intended so-called "multi-racial" voting constituency.

Political developments since 8 March 2008 have made GERAKAN even more irrelevant to voters.

As Prof James Chin of Monash University said, Malaysians have stopped buying GERAKAN's multi-racial brand because GERAKAN is seen as just another English-speaking Chinese-based party, while PKR has become a multi-racial party of choice by Chinese, Malay and Indian voters.

When a second tier grass-root UMNO politician of the like of the UMNO-racist Ahmad Ismail can insult Koh Tsu Koon in the media, without giving a grain of respect to Koh Tsu Koon being a leader of a component party of Barisan Nasional (worst still, got away with it without a word of reprimand from the top UMNO leadership,) it goes to show how LITTLE, if at all, "meaningful role" GERAKAN has within Barisan Nasional.

GERAKAN's effectiveness and usefulness within Barisan Nasional, (the same is said for MCA and MIC), is at the pleasure and convenience of UMNO. That is the brutal fact.

Thus, leaders in GERAKAN from Koh Tsu Koon downwards and Ong Ka Ting and those self-interested MCA Ministers and MPs, it is time for them to take their heads out of the sand and to come out of this political nightmare of their voters.

One thing is certain about the road ahead for GERAKAN (and MCA) staying in Barisan Nasional under the leadership of UMNO (in which arrogant behaviour and racist attitudes are still prevailing): OBLIVION or TOTAL IRREVELANCE.

There is such a thing called PRIDE and INTEGRITY and SELF-WORTH, even for a political party that was white-washed in the last general election.

So we say to Koh Tsu Koon and to his senior party members,

"The time is NOW to do the RIGHT thing, not only for the sake of the party, but to save further embarrassment to GERAKAN grassroot members around the country."