SIGNS of DESPERATION in UMNO 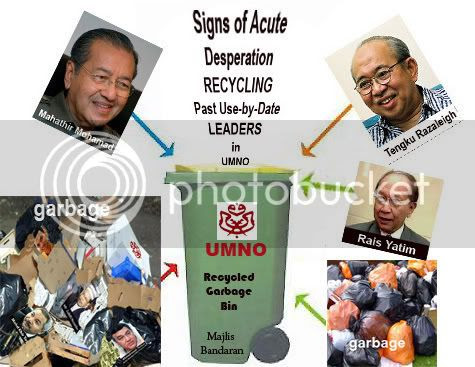 Mahatir is the devil incarnate, that is what Mr Justice Ian Chin said and it is also my opinion that the judge's description of him is accurate. Apart from the fiendish divisiveness that is the devil's work, the other so calles leaders are not worth a mention good or bad.

Mahatir is no leader because his legacy has been one of the most destructive force that tore apart the fabric of Malaysian society for ever; I go as far to say that because of the evil that was perpetrated by Mahatir, Malaysia will not soon find commonality among our races. Malaysia will remain divided unless we give Dato Seri Anwar a chance to salvage our society from ultimate and dire upheaval.

It is quite fair to say that UMNO had never in its 50 year history as a political party produced any wise and visionary leaders. I need to say that "the Tengku" was a decent man but he was no visionary either. Malaysia deserves the leaders that have ruled their nation.

What is the legacy of Mahatir ? History will record his contribution towards the division of Malaysian society and the consequent collapse of civil society and the breakdown of RULE of Law; the begining of Rule of judges instead of rule of LAW.

The evil influence of Mahatir can be sumed up in two catagory. The most vile of these two factors is the prevalence of injustice and abuse of the legal and judicial system by his pro-active pervertion of constitution to reinforce nd extend his autocratic rule of his whim. This evidenced by the example of the saga of the Lingam Types. In any other system other than Malaysia, the lot of these megalomaniac RIGHTFULLY BELONG IN JAIL. In Malaysia there is no rule of law but rule by judges who conduct their duties with criminal impunity. I am victim of such abuse of judicial power. I could if I could mention her name, but if I mention her name this opinion will not be published.

This woman judge is on the bench of the Malaysian court of appeal, and most of our lawyers in KL will know her name because I send fax to 400 lawyers per week and another 100 to several others(the Malaysian media, members of Malaysian judiciary and members of the diplomatic corp.) This woman judge does not understand what "an appeal" means and she does not understand that only one of the two interlocutory applications can be APPROVED; if she approved application for security for costs she cannot then again approve another application for striking out by the respondents who had been approved a little earlier with an order for security for costs. Such actions which this judge meant to punish me twice (take my wife's Rm.60,000 and strike out her petition at the same time. Judge wanted to punish me twice because I complained her mischief to the then Chief Judge Tun Fairoz.)

She knows she cannot do what she did because her conduct and actions are deemed to be criminal; she did it know that her actions can be criminal because she does not know enough of the law, and in truth she is illiterate in the LAW

This woman judge of the court of appeal is the result of Mahatir's NEP. By his NEP and his ploy to win the support of the Malays, he was willing to pervert the systems. Mahatir's NEP produced an Army of non performing so called graduates WHO CANNOT FUNCTION in their jobs. What is the use of a graduate who is good for nothing ? This is what Mahatir had done to the Malays, graduate an army of do nothings.

The second legacy of Mahatir is to drive away competent young Malaysians into the waiting arms of Australia, Canada, Singapore and Australia and more recently to China. For the moment the god given oil is keeping afloat and keep the pockets of corruption well provided, but the day when Malaysia has to earn a living, the Malays in particular will find that they do not have the skills to keep alive.