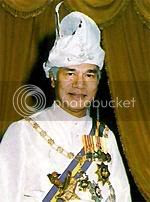 According to State executive councillor A. Sivanesan, the sultan expressed grave concern over the plight of Ragu and his family who have been sleeping and bathing at petrol stations since their arrival here. 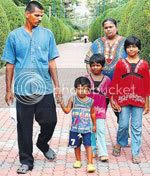 Ragu, 33, his 27-year-old wife G. Neelaawathi, and their three children, between the ages of two and nine, arrived in Ipoh on Tuesday to meet Sultan Azlan Shah to obtain the necessary supporting document for his MyKad application.

Sivanesan said he would be following up with Home Minister Datuk Seri Syed Hamid Albar on Ragu's MyKad application.

"I have applied for the MyKad eight times since 1998 but have failed each time because the NRD wanted me to prove that I was born here.

I don't have other evidence to show except the birth certificate bearing only my father's name and the place of my birth. I just need someone to help me get my MyKad."

Asked where he would be putting up while waiting to get his temporary identification document, Ragu said he and his family would continue to sleep in their family car.
Posted by Malaysian Unplug at 13:48:00