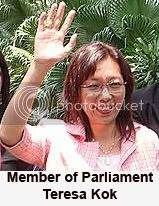 DAP Seputeh MP Teresa Kok was released at 1pm today, after being held under the Internal Security Act for a week, revealed her lawyer Sankara Nair.

Kok walked out from the police station at 1.40pm.

Deputy Inspector-General of Police Ismail Omar said that Kok was released investigations showed that there was reason to detain her any further.

He said that she was released unconditionally.

Teresa Kok was held under the ISA detention for allegedly causing tension and conflict among races.The three-term MP has been in news in recent days - especially in Umno-owned Utusan Malaysia - after it was claimed that she had told mosque officials in Kota Damansara, Sri Serdang and Puchong Jaya to tone down the call to prayer.

Teresa Kok, who is also Kinrara state assemblyperson, has denied the allegations and one of the mosques, Masjid Kota Damansara, has clarified that a damaged amplifier has resulted in the calls to prayers to be made without the aid of a PA system.

Another mosque, Masjid Kinrara, has also denied that she was involved in a residents petition asking for the mosque to lower the volume of its loudspeakers during prayers.

Raja Petra, who has targeted the top government figures on his popular Malaysia Today website, however is still under detention.

MP Teresa Kok should NOT have been arrested in the FIRST place if the Police Force under the watch of Deputy IGP Tan Sri Ismail Omar had been competent in their job.

As every Malaysian knows except the Deputy IGP and the Police, the arrest of Teresa Kok under ISA was based on false allegations by Mohd Khir Toyo which was reported widely by Utusan Malaysia with malicious intent. It is obvious that Mohd Khir Toyo and Utusan Malaysia had mischievous design in making and reporting those allegations against a respected Member of Parliament-cum- Senior Exco member of the Selangor State Government.

Arresting an elected official before conducting a thorough investigation by our Police is one of the methods used in Communist countries such as North Korea, in Police States and in places like Robert Mugabe's Zimbabwe.

We ask, why didn't the Deputy IGP get his Police personnel to conduct a thorough investigation FIRST to determine the truth of the allegation?

Does the Deputy IGP really think that the country will come to a boil if Teresea Kok is not arrested?

It is hard to believe that a senior police officer of the standing of a Deputy IGP actually prefers to arrest a respected Member of Parliment base on some flimsy allegations by Mohd Khir Toyo, BEFORE undertaking an investigation on the allegations.

While the rest of the country is fully convinced that Mohd Khir Toyo was spreading lies about Teresa Kok on the "azan" issue with the intent to create racial and religious hatred against DAP and the Chinese community, the Deputy IGP seem to be at first totally blind and deaf to the fact and to the call by Malaysians that the actual guilty person who should be arrested is Khir Toyo and NOT Teresa Kok, and secondly, to be hopelessly slow to realise it.

Is this an indication of embarrassing incompetence on the part of the Deputy IGP or more of a case of the Deputy IGP blindly following orders from his political masters despite the gravity of the available evidence otherwise?

While we are relieved that Teresa Kok is released, we are still dismayed by the fact that the Police is yet to arrest Mohd Khir Toyo for false allegations against a respected Member of Parliament and for creating a dangerous atmosphere of racial and religious mistrust between Malays/Muslims and non-Malays/non-Muslims.

In addition, Malaysians are still waiting for the Police to act forcefully against the racist Ahmad Ismail, not withstanding that his political party (UMNO) has disciplined him, which is irrelevant in as far as the law of the land is concerned.
-Malaysian Unplug

PRESS STATEMENT BY TERESA KOK AFTER HER RELEASE

I have been released after being detained in solitary confinement in a 6ft by 8ft holding cell for seven days under the Internal Security Act. I was informed by the police that they detained me under Section 73(1) of Internal Security Act 1960, which means I have incited racial and religious tension and conflict.

After being detained for seven days under the guise of so-called investigations, the police FAILED to produce any evidence or proof of me being involved in the activities of causing racial and religious tension.

They were only able to ask me few questions based entirely on the false and malicious article written by Zaini Hassan under the topic "Azan, jawi, JAIS, Uitm dan ba-alif-ba-ya" that was published in Utusan Malaysia on Sept 10, 2008.

The three main questions that the investigation officers asked me were:

ii) whether I have made a statement that 30% of the Selangor Islamic Department (JAIS) allocation is to be given to other non-Islam religious bodies; and

iii) whether I have opposed to the Jawi wording road signages in Kuala Lumpur.

I denied the first two accusations as I did not do any such things as accused. I also told them that the issue of opposing Jawi road signages in Kuala Lumpur was done in January/February 2008 at the request and following the pressure of resident associations. The resident associations, particularly in Taman Seputeh, were most unhappy because many of the road signages were changed arbitrarily by DBKL a few months before and changed again soon after this time with Jawi wordings. They were strongly opposed to this kind of wastage of public funds by DBKL.

I was quite surprised that there were no other questions posed to me besides these few main questions.

If the police wanted to carry out investigations on me, they can always ask me to give statements in any police station and there was absolutely no need to detain me under the ISA for seven days. This is a phenomenal abuse of the power of police under the ISA.

Besides, it is nonsensical for the police to detain me under the ISA merely based on the unsubstantiated article written by an irresponsible columnist(Zaini Hassan) in Utusan Malaysia.

How can they (the Police) regard that article as the gospel truth WITHOUT investigating the writer in the FIRST place?

How can Utusan Malaysia publish it WITHOUT verifying the facts?

I wish to ask the Police WHETHER they have called Zaini Hassan and Utusan Malaysia's editors for questioning before and after my detention.

I know that the imam of Bandar Kinrara mosque has publicly denied that I got involved in the Puchong residents petition against the azan of his mosque on Sept 13. I am also quite surprised to read in the New Straits Times dated Sept 19 that the official of the Bandar Kinrara mosque was called by the Dang Wangi police for statement recording only yesterday afternoon.

Why did the police do it SO LATE, one week AFTER I was arrested? Why didn't they check their facts first BEFORE they arrested me and put me behind bars?

I see my detention as a ploy by Umno to try to cover up the embarrassment and the outrage of the racist statements made by Ahmad Ismail in Penang.

I wonder why did they choose an innocent person like me as I have never made any racist statements or racist speeches in the past?

As I have mentioned in my previous lawyer's visit, I will sue Utusan Malaysia, Zaini Hassan and Dr Khir Toyo. I have also instructed my lawyers to sue the Malaysian government for my unlawful arrest and detention.

As I am free from ISA detention today, I also call for the release of Raja Petra, the Hindraf Five and all other 60 over detainees under the draconian ISA.

I would also like to thank all politicians in the ruling parties as well as in the Pakatan Rakyat, NGOs, churches and all social organisations who have campaigned and
and prayed for my release.