The United States summoned Friday Malaysia's top envoy in Washington to protest its crackdown on dissent at a time when the opposition was attempting to take over power in Kuala Lumpur. This is the second time Malaysia's charge d'affaires was summoned to the US State Department in a month.
Read here for more in Malaysiakini 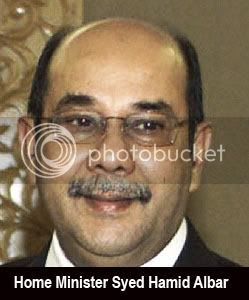 So far, three Malaysians were arrested under the draconian Internal Security Act:

Meanwhile, the BN-Government has asked 40 of Barisan Nasional Members of Parliament to flee Malaysia to Taiwan on the pretext of a study tour of agricultural activities, to prevent some of them from crossing over to the Opposition Pakatan Rakyat. (Opposition Leader Anwar Ibrahim had targeted September 16, to take over Government). According to a report, the 40 MPs are asked to go to Hongkong instead of flying back to Malaysia after visiting Taiwan.

Appeals were made by Raja Petra's wife, Marina Lee Abdullah and by Opposition leaders to stay calm so as NOT to give the UMNO thugs and UMNO-sponsored Mat Rempits an excuse to go on a rampage on the roads of KL, Ipoh and Penang to create racial chaos as what happened 39 years ago in 1969.