UMNO Racist Ahmad Ismail Says , "I SAID NOTHING WRONG !! " What Are You Going to Do, DPM Najib ?

More BAD NEWS for GERAKAN and MCA as Partners of UMNO in BARISAN NASIONAL. 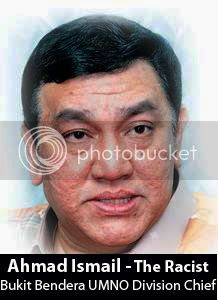 He said during a ceramah in Permatang Pauh in Aug 25, "...as the Chinese were only immigrants it was impossible to achieve equal rights amongst races.”

Ahmad Ismail, the Bukit Bendera UMNO Division Chief said today he would NOT apologise even AFTER the deputy prime minister has already done so on his behalf.

He added that he did NOT feel sorry and he would NOT recant his alleged racist remarks against Chinese Malaysians during the recent by-election campaign in Permatang Pauh.

“I am not apologetic because I didn’t do anything wrong.

As far as I am concerned, I did not say or do anything wrong.

So why should I apologise?”

Ahmad has given his statement at the state police headquarters in Georgetown last night, following a series of police reports lodged against him in Penang (left), Kuala Lumpur, Ipoh, Seremban, Malacca and Petaling Jaya by Chinese-based political parties, including MCA, Gerakan and DAP.

The case is being investigated under Section 4(1)(B) of the Sedition Act 1948, which carries a fine not exceeding RM5,000 or a minimum three years’ jail, or both upon conviction.