MCA vice-president Datuk Donald Lim Siang Chai announced that he would contest the party deputy presidency at the MCA election on Oct 18.

"I am already a vice-president, so it is only natural that I contest a higher position and I have decided on deputy president." 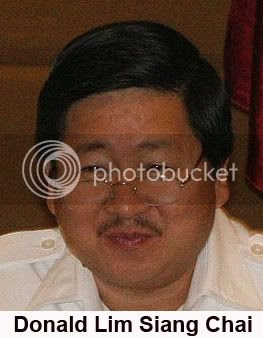 Donald Lim Siang Chai was rejected by voters when he failed to retain the Petaling Jaya Selatan parliamentary constituency in the March 8 general election. Read here for more.

Donald Lim Siang Chai was quoted as saying if Chinese Malaysians vote the Opposition, it will create a tense enviroment that will affect business and the economy and will result in the government being ruled only by Malays.

Such statement from a Chinese leader offends the sensibilities of ordinary Chinese and Malays. It is without doubt aimed at creating communal insecurity among Chinese Malaysians . It is racist in intent.

Donald Lim is playing gutter racial politics, no different from those ultra-Malays in UMNO.(Read here for more)

Malaysia cannot afford to have any Chinese leader in a political party in a ruling coalition government who still espouses racially-biased views despite the fact that voters across all races after March 8 election have rejected race-based politics of UMNO, MCA and MIC.

It is time that MCA grassroot members show the necessary courage to move MCA FORWARD for the sake of their future generations after MCA's dismal performace in March 8 Election. For MCA leaders to continue to play the race card and harp on racial issues will only lead to MCA into political wilderness, worse still, into oblivion. To move forward, MCA grassroots should start dusting off leaders from the MCA hierarchy who were already rejected by voters, especially those who still play the race-card to win support. Donald Lim Siang Chai is one such person.

Donald Lim Siang Chai , despite being an incumbent MP and former Deputy Tourism Minister, was rejected by the predominantly Chinese voters in Petaling Jaya Selatan seat. And that should be a clear message to MCA grassroots that his racially-based politics is totally out of step with majority of voters desiring a new Malaysia.

Likewise, the MCA membership should reject Donald Lim Siang Chai as Deputy President of MCA, for two reasons: firstly for playing the race card and secondly, voters in his constituency did NOT want him to re-enter Parliament in the March 2008 election.

Donald Lim Siang Chai belongs to the backward-looking old school of racially-biased MCA politicians very much favoured by UMNO, so much so that a vote for MCA by Chinese Malaysians in any election becomes a vote for UMNO.
Posted by Malaysian Unplug at 09:32:00

Put the Soh Chai under ISA.

Please excuse for this sidetrack ...

I am about to launch a “Free Malaysia Now” site.

Is there any “public service announcement” type of ads out there that I can put on my site?

Specifically, I am looking for full page “animated ads”, preferably in “flash”, less than 1 minute in length, that carry the “Anti-ISA”, “Free PKR”, “Down with Racism” and similar theme.

If you know of such “ads”, or are interested in this, please email me the ads.

Disclaimer: I am NOT going to pay anyone for the ads, because I am putting the ads on my site for FREE (hey, I pay for the bandwidth, la) and I ain’t trying to sell anything !

If you prefer to be anonymous, please indicate it in your email. If you want credit to your ads, please say it so.

Thank you all in advance !

When will all these Morons' Organizations start thinking straight like normal human beings.

Malaysia already being headed by the dumbness and daftest prime minister, with Donald Lim Sor Chai being MCA Racist leader, will Malaysian politics ever grow...???

Ka Ting & Ka Chuan are crazy for Powers thinking the Chinese are as much as daft and dumbs as they are...

At least Soi Lek knows how to be a Party Man.

The only reason for him to dissuade chinese from voting for opposition is that scums like him will be sidelined and forfeited of opportunities to enrich themselves. Does he really care about the welfare of the people? If he is so magnanimous, how come we do not see any charitable work from him helping the people and making this country a better place now? Can only do that if he holds a top post? Go eat shit and die! I trust Donald Duck more than this piece of shit.